Rethinking International Law for the Age of the Anthropocene 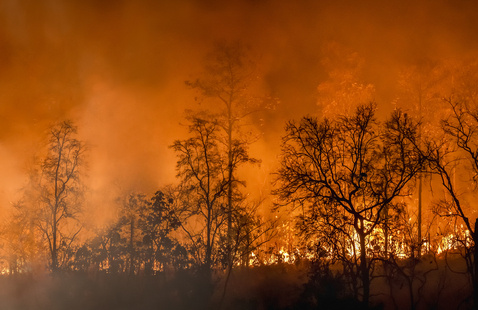 As illustrated by the fires in the Amazon and the inability of the international community to intervene when events such as this within one nation threaten the habitability of the planet, this symposium will examine whether international law is adequate or can be made adequate to the challenges presented in trying to reduce the climate crisis, potential mass extinctions, and other threats to the planetary ecosystem, as well as to dealing with the results of such environmental degradation, including the decrease of habitable lands and the mass migration of the deposed.

Rachael Salcido, Professor of Law, University of the Pacific McGeorge School of Law

9am to 9:15am PST - Welcome Remarks by Michael Hunter Schwartz, Dean, McGeorge School of Law

9:15am to 11am - The State of International Environmental Law

11:15am to 1pm - Human Rights and International Environmental Law

Relevant publications and presentations by speakers:

Law in the Anthropocene Era by Eric Biber

Addressing the many ways that humans have come to dominate the planet and global systems will require unprecedented legal interventions and changes, regardless of whether we seek to mitigate the impacts or adapt to them. Those interventions will in turn put deep pressures on a range of key legal doctrines that are foundational to Anglo-American jurisprudence, and may create real tensions with a classical liberal vision of individual autonomy that is sheltered from state regulation.

1972 was a watershed year for international environmental law, marked by the UN Conference on the Human Environment in Stockholm. As the 50th Anniversary of that conference approaches, there remains a great paradox. The legacy of the Stockholm conference has been the rapid development of environmental law throughout the world, particularly at the domestic level, and the past half-century has seen dramatic advances in law and technology that promise to facilitate a transition to cleaner, renewable energy. However, at the same time, the past 50 years have seen an acceleration in the pace of environmental devastation, at a rate never before seen in the geologic record.

In the Anthropocene, global-level challenges have exposed the failure of international law to provide for sufficient and effective cooperation and collective action. These failures help explain the disconnect between the development of environmental law and the degradation of the global environment. There are no easy solutions to these problems.  Even in the absence of dramatic changes to the international law order, the scale of the environmental crisis still necessitates taking stock of how international law has changed over the past 50 years and how we might improve it.

This presentation will focus on one aspect of environmental law development: its progressive nature. The will and trend since Stockholm has been to move forward. Internation negotiations tend to be progressive in nature, and human rights are, by definition, a progressive, forward-looking idea. Focusing on progressivity and cementing past gains in environmental protection and cooperation is essential - although the pace of evolution in international remains too slow.

Not All Inclusive: The Escazú Agreement as a Missed Opportunity to Integrate Indigenous Rights into International Environmental Rights by Patrícia Galvão Ferreira

The 2018 Escazú Regional Agreement on Access to Information, Public Participation and Justice in Environmental Matters has been rightly lauded as an important first step forward in Latin America. Escazú's procedural environmental rights, and reaffirmation of a region-wide substantive right to a healthy environment, are expected to offer new international legal and political tools to social groups in Latin America seeking to push governments to give effect to constitutionally recognized substantive environmental rights. This article argues, however, that while Escazú represents an important step towards integrating human rights into IEL, not all human rights have been equally integrated, as indigenous rights were largely left outside the Escazú Agreement. This lack of integration invites reflection over the dominant and the excluded voices and values underpinning current Indigenous perspectives into IEL may prove essential if we are to change the anthropocentric paradigm that is leading us towards serious ecological and Earth system crises.

Climate change is one of the cruelest manifestations of injustice confronting humanity. Caused primarily by the greenhouse gas emissions of the world's most affluent populations, climate change is having a disproportionate impact on those who contributed the least to the problem, including the small island states, least developed countries, indigenous peoples, and the poor. Although climate change is anticipated to displace between 25 million and 1 billion people by 2050, international law treats climate-displaced persons who cross international borders as unauthorized migrants. The racialized hostility of the US, European Union, and Australia, to persons who are currently fleeing poverty, conflict, and environmental degradation, does not bode well for climate-displaced persons. This presentation will examine the emerging legal and policy responses to climate displacement through a racial justice lens.

An essential starting point to reimagining environmental standards, approaches, and institutions, and thus a potential backbone for a modified system of international law relating to the environment (IEL), is the recognition of the reciprocal relationship between the environment and human rights, including with respect to environmental justice and environmental human rights defenders. This paper focuses on what is seemingly the most visible societal symptom of IEL's ineffectiveness in the Anthropocene, namely the growing mobilization of civil society worldwide. The discrepancies between States' international commitments to protect the environment and what is actually needed and accomplished has become too glaringly overlooked. Mass movements demanding more action and accountability are shaking societies with organized, enduring, and innovative forms of dissent across and beyond borders. Such vibrant and widespread discontent spotlights a further flaw in the system, specifically the exclusion, or too-limited inclusion, of civil society in international environmental decision making. Because of the human rights to participate in decision making and access to information, and especially considering the critical role grassroots activism played in catalyzing, shaping, and advancing the environmental protection framework in countries around the world, civil society should be guaranteed more extensive and effective participation in decision making, both vertically and horizontally. Civil society is now powerfully attempting to reclaim its spaces. Through globalization, the web, and a sum of interconnected grievances, the movement is expanding transnational, sharing demands and objectives. The strength and consequences of such vigorous mobilization should not be underestimated.

The Irresistible Force Meets the Immovable Object: The Treaty in the Time of Climate Change by Stephen McCaffrey

The Intergovernmental Panel on Climate Change has been predicting dire effects of planetary warming for years, but nations have been too slow to respond. Even the vaunted Paris Agreement, which the United States has recently rejoined, is not actually up to the challenge of holding post-industrial warming to 1.5 degrees Celsius, and we are experiencing calamitous effects of climate change even earlier than the IPCC has predicted. This raises the question whether the treaty, a bulwark of international law that is prized for its stabilizing influence on international affairs, can adapt to these rapidly-changing conditions or whether it will have to be consigned to the scrap-heap of history. This paper/talk will address that question."

Ocean plastic pollution is a critical global environmental threat, impacting human, wildlife, and environmental health. The plastic pollution problem is inherently transboundary, and has received significant attention in local, national, and international forums. The parties to the Basel Convention brought certain shipments of plastic wastes under the purview of hazardous waste controls by amendments adopted in May 2019. This step has been hailed a significant accomplishment, and among other things reflects recognition of the threat of mismanaged plastic waste. Yet this and other current governance strategies are insufficient to wrap around the entirety of environmental problems posed by plastic generation, use, and waste. Increasingly relevant in addressing plastic waste problems are local actions to ban the use of plastics, and to contest the issuance of permits to site new plastic producing facilities. In addition, the lack of sufficient waste management capacity in some nations forms an equally important concern. As the United Nations Environment Assembly, parties to several global environmental instruments, and non-governmental organizations work to develop a new international agreement on plastic pollution, attention to these local issues is critical to the success of a new convention.

We Are The River: Rights for Nature, Legal Transplants, and International Law by David Takacs

The New Zealand Parliament has recently granted the Whanganui River and the Te Urewera mountain ecosystem rights as legal persons, with a Māori governing board to speak for the nonhuman entities, based on the traditional cultural precepts. Far from an isolated precedent, in what the U.N. Secretary-General calls "the fastest growing legal movement of the twenty-first century," legislatures, courts, or voters in Australia, Colombia, Ecuador, Bangladesh, India, Uganda, and the U.S. have also declared that rivers and other living systems have legal rights. This Article chronicles the movement o grant nonhuman entities legal rights. I analyze the statutes and judicial opinions driving this legal evolution, drawing extensively from interviews I conducted with key figures negotiating and advocating for these initiatives. I explain what the current and developing laws and judicial opinions seek to achieve. Deriving from disparate historical, philosophical, and legal backgrounds, they pursue disparate goals; yet all of the moves to grant legal rights to nonhuman entities aim to enshrine in the law the fundamental symbiosis between human and nonhuman ecological health, and to empower suitable stewards who will nurture that symbiosis. I describe how newly vested spokespersons for nature seek to turn novel legal theories into real legal work that protects human and nonhuman communities. I explain who now represents the nonhuman entity and discuss what improvements - for human and nonhuman communities- they hope will redound that would not have resulted from more traditional legal protections. I also discuss early results that have emerged from grants of legal personhood to nonhuman entities.

As these laws inscribe new legal relationships between people and nature, they ask: what does it mean to convert from "we own the River" to "we are the River?" I conclude that by sanctifying the interdependent relationship between human needs and healthy ecosystems, granting legal rights to rivers may contribute to reversing ecological degradation in this century and beyond.

The past five decades have seen an incredible growth in the number of international environmental treaties, possibly numbering now in the thousands according to one political scientist's count. Their subject matters range from climate change to ozone depletion to biodiversity loss, with some treaty regimes reporting remarkable success in solving global environmental problems such as ozone depletion. At the same time, the development of customary international law norms focused on the environment has largely staled. At present, there are only a few such legal norms that are well established and widely accepted, such as the transboundary harm (or prevention) principle and the duty to perform transboundary environmental impact assessments. My paper will address questions fo what accounts for this gap, why it matters, and what should be done.