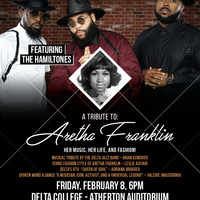 A Tribute to Aretha Franklin Featuring: The Hamiltones

University of the Pacific and San Joaquin Delta College are partnering to present the 2019 Black History Month Celebration.  As part of the celebration, there will be a multi-faceted tribute to the late music icon, Aretha Franklin.

On February 8 at 6:00 PM in Atherton Auditorium, there will be a concert featuring the Grammy nominated group, The Hamiltones. Originally from North Carolina, the trio of singers became widely known from their roles as background singers for R & B superstar Anthony Hamilton. The Hamiltones became a video viral video sensation after releasing videos of several cover songs, appearances on late night TV shows and backstage footage of Anthony Hamilton’s recent tour.  The videos demonstrated their beautiful harmonies and creative sense of humor as they weaved in some hilarious commentary into every video. The Hamiltones released an EP on Soundcloud that has been reviewed as; "original compositions, each highly melodic, rhythmically interesting, and vocally powerful. Quality songwriting being what it is of late in pop music, it’s thrilling to hear well-crafted compositions that are as much a songwriting showcase as they are vocal showcases." Opening this concert will be Delta’s Jazz Band under the direction of  Brian Kendrick and Delta’s RTV “Queen of Soul” Adriana Brogger. A tribute to Aretha Franklin’s fashion styles over the years will also be part of the event led by Leslie Asfour.  The program will will also feature  a spoken word and dance performance by Valerie Gnassounou.

Other events at Delta include a chicken and waffle fundraiser sponsored by the African American Employees Council on February 21 in Upper Danner Hall and a display paying homage to the Tuskegee Airmen on February 26 in the South Forum.