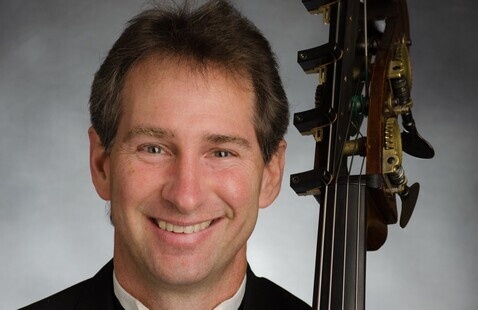 Andy Butler received his Bachelor’s Double Degree in Performance and Education from the Oberlin Conservatory of Music, and his Master’s Degree in Performance from the San Francisco Conservatory. He is the Principal Bass of Opera San Jose, the Fresno Philharmonic, and the California Symphony.  Andy also holds the titled chair of Assistant Principal Bass with the Santa Rosa Symphony and the Sacramento Philharmonic Orchestra. He is a regular member of both the Marin Symphony and Oakland Symphony.  Andy also substitutes for many orchestras in and around the Bay Area, including the San Francisco Symphony, Symphony Silicon Valley, the Modesto Symphony, and the San Jose Chamber Orchestra.  During the summer, Andy is a participant in the Music in the Mountains Festival and the Sun Valley Summer Symphony. He is actively involved in teaching as well as performing.  His positions include: Double Bass Professor at Saint Mary’s College, chamber music coach at The College Preparatory School, Berkeley Youth Orchestra coaching staff, string faculty of the Sun Valley Summer Music Workshops, and bass instructor for the Home of United String Ensembles (H.O.U.S.E) program and Oakland Symphony’s M.U.S.E program, both of which serve students in the Oakland Public School System. During the winter and spring of 2019, Andy led the Santa Rosa Symphony String Quintet for numerous educational concerts and string master classes throughout the greater North Bay. More recently, his four-part miniseries Double Bass Dimensions, which explores the bass in a solo capacity playing familiar tunes, was released by the California Symphony.

Free to the general public

Note: as of August 2021, University of the Pacific requires all individuals on campus to wear a facial covering indoors.

Free to the public