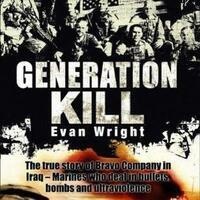 Evan Wright: "Generation Kill: From Iraq to Memoir to Miniseries"

Award-winning author Evan Wright will speak about the challenges of embedding with the US Marines in Iraq and how his memoir became an Emmy Award-winning HBO miniseries.

In 2002, Wright went to Afghanistan on assignment for Rolling Stone.

In 2003, he was embedded with the 1st Reconnaissance Battalion of the United States Marine Corps during the early stages of the 2003 invasion of Iraq. Wright spent his entire time embedded in a recon team led by Sergeant (at the time) Brad Colbert. He was under fire with the Marines for several weeks and accompanied them "on point," or in the lead vehicle. One of the Marines in the unit told The New York Times, "He was in the worst possible place to have a reporter. During the first firefight, he took 10 rounds in his door.] Wright expressed admiration for the Marines, but warned them that a reporter's motto is "charm and betray.

He published a series of articles for Rolling Stone magazine titled "The Killer Elite" which, in 2004, received the National Magazine Award for Reporting, the top prize in magazine writing.

He then wrote Generation Kill.

College of the Pacific, English Department