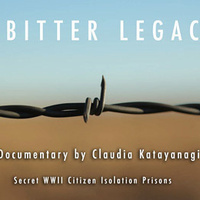 In recognition of Asian/Pacific Islander Month, Pacific presents a screening of the documentary "A Bitter Legacy" and talk with filmmaker Claudia Katayanagi. This feature documentary investigates the “Citizen Isolation Centers,” harsh and secret World War II prisons created within the Japanese American incarceration camp system to separate citizens deemed by the American Government as “trouble-makers” from the other Nikkei prisoners. These secret prisons have been called “precursors to Guantanamo.”

The story of Japanese American incarceration is increasingly relevant to today’s conversations about civil rights abuses and racial profiling. A Bitter Legacy makes clear why civic engagement and socio-political activism is so necessary to maintain a democratic society, especially during times of upheaval.

Reception at 6:30 p.m. in the Regents Dining Room, Film and presentation at 7 p.m. in the Janet Leigh Theatre.

Anyone requiring accommodations to attend this event, please contact Xiaojing Zhou at 209.946.2611 or xzhou@pacific.edu.

free and open to the public