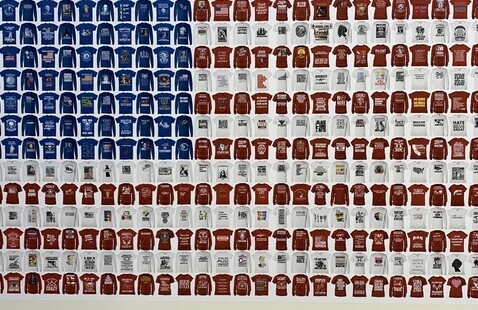 Jennifer Little’s multimedia exhibition, Gun Culture, will be on display from Jan. 28–Feb. 28. at University of the Pacific’s Reynolds Gallery. This exhibition explores the connections between right-wing gun culture and political messaging in the United States’ 2020 Presidential election cycle. Guns are often marketed in ways that reinforce racist, xenophobic and sexist stereotypes while celebrating the violent revolutionary ideals tied to the American Revolutionary War, Civil War, and the genocide of Native Americans in the Frontier West.

This exhibition combines documentary photographs of gun stores and their advertising with digital collage pieces featuring real, appropriated political slogans being used in the 2020 election cycle. The centerpiece of the project is a 44x85-inch digital collage of the American Flag titled "Divided States of America.” The flag is made up of 390 different T-shirts each featuring alternating liberal and conservative political slogans about gun rights and gun control. The flag is divided into sections by theme with the blue square exploring dueling perspectives on what is patriotism and who is American. Each of the white stripes on this flag is devoted to a minority group that has been targeted by hateful political rhetoric in the Trump era. The top white stripe explores gun-related political messaging about Native Americans, and others are devoted to diversity, African Americans, immigrants, the LGBTQ community and women, respectively. The red stripes address political slogans about guns and Trump, guns and religion, guns for protection, mass shootings, school shootings, gun rights, gun control and hunting.

This exhibition also includes a community involvement installation titled “Take a Target, Leave a Target, Share a Story.” This project is intended to give a voice to the often anonymous victims and survivors of discrimination, hate crimes and gun violence in our society. It invites visitors to the exhibition to write personal messages on real shooting targets left on a desk. We will hang the stories and messages written on shooting targets contributed to the show for the closing reception in Reynolds Gallery on Feb. 27. The blank human silhouette on a shooting target acts as a powerful metaphor for those who have been marginalized by discrimination, violence and related traumas to reclaim their voice and share personal stories about how the divisive political climate in our country is impacting their lives, their families and their hopes for the future.  Sharing stories that inspire empathy, compassion and understanding for everyone’s shared humanity are one of the most effective ways to break out of cycles of escalating violence, hate, fear, and discrimination.

College of the Pacific Art and Graphic Design