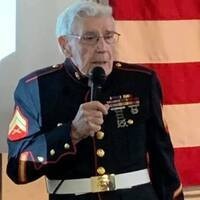 Please join Pacific’s Student Veterans Organization for a talk by Corporal Frank Wright, who served during the Battle of Iwo Jima.

Wright, born on July 5, 1925, spent four years in the U.S. Marine Corps and as a member of the 4th Marine Raiders Special Forces with Colonel James Roosevelt as commander. He fought in four major battles, traveled between islands on eleven different Navy ships, was wounded by a bayonet in the stomach while recapturing Guam and was shot in the chest and arm by machine-gun fire on the island of Iwo Jima. He spent the last six months of his enlistment as a Marine drill instructor training new recruits.

Along with the talk, Wright will be signing copies of his book (available for purchase at the event), "Battle in the Pacific: WWII My Personal War Causing PTSD."

Join us in honoring Corporal Wright for Veterans Day.

College of the Pacific, English Department