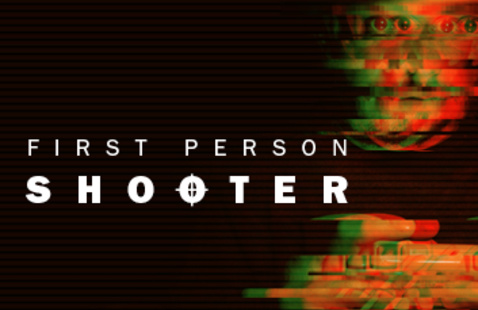 First Person Shooter deals with a school shooting in rural Illinois and its aftermath. Inspired by the Columbine Shooting in 1999, a national tragedy soon becomes a national debate when one of the school shooters, Billy Cahill, leaves behind a videotaped message thanking a gaming company for creating the gory game that served as the teen's inspiration. With a lawsuit in the air, JetPack Games goes on the defensive while more parents of the victims sign on with lawyers.

Throughout the play, the game developer Kerry Davis deals with guilt for his unintentional involvement in the senseless shooting, while the strong and broken father, Daniel, lives with the grief over the loss of his only son. The play touches on issues of violence, greed and racism, as well as the medias ability to manipulate our perceptions of events. First Person Shooter brings up issues that lead to a larger conversation about each of our areas of responsibility for teen violence.

College of the Pacific Media X