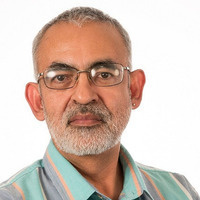 Reframing Martín Ramírez as a Latino/Latin American Artist: Outsider Art and the Politics of Artistic Recognition

Martín Ramírez, a Mexican migrant worker and psychiatric patient without formal artistic training, has been hailed by leading New York art critics as one of the twentieth century’s greatest artists. His work has been exhibited alongside masters such as José Clemente Orozco, Diego Rivera, Rufino Tamayo, Salvador Dalí, and Marc Chagall.

In this talk, Víctor Espinosa, one of the foremost experts on Martín Ramírez and an authority on transnational migration and art, will introduce Ramirez’s biography and the trajectory of his artwork, from its systematic destruction in the 1940s to its recent recognition into the mainstream art world and individual works that have sold for as much as a half-million dollars.

Espinosa considers the stakes of Ramirez’s categorization as psychotic, contemporary folk, and outsider artist: What does it mean for Ramirez to be considered an American contemporary folk artist versus an outsider versus simply a Mexican or Latin American immigrant artist? What actors and discourses are crucial to understanding how a Mexican migrant worker with¬out artistic credentials came to be recognized by some scholars and influential New York art critics as simply one of the greatest artists of the twentieth century?

Espinosa holds a PhD in sociology from Northwestern University and currently teaches at the Department of Sociology at the Ohio State University at Newark. He is the author of El dilema del retorno: Migración, género y pertenencia en un contexto transnacional (El Colegio de Michoacan, 1999) and Martín Ramírez: Framing His Life and Art (University of Texas Press, 2015). His most recent book project, with theater and performance studies scholar Ana Elena Puga, Heroes, Martyrs, and Saints: Performances of Suffering in Latin American Migration, is currently under contract with Palgrave Macmillan press. Espinosa has also contributed to journals, books, and art catalogs including Martín Ramírez (Marquand Books, 2007) and As Essential as Dreams (Yale University Press, 2016).

FREE and open to the public