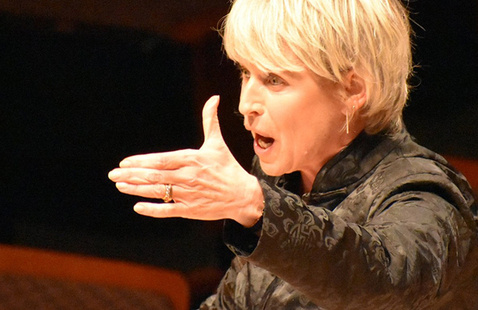 The Symphonic Wind Ensemble is comprised of Pacific's most accomplished wind, brass and percussion students. Repertoire is drawn from the standards for concert band as well as transcriptions and the great wealth of contemporary music for wind ensemble. The ensemble plays on Pacific's campus but also travels extensively performing recently at Stanford, CA, and New York City's Carnegie Hall. The concert on November 9 will be guest conducted by Cynthia Johnston Turner. Ms Turner has been a conductor and clinician in the U.S., Latin America, Europe and Canada. She has served on the faculty of Cornell University and as a guest conductor with the Syracuse Society for New Music and principal guest conductor with the Austrian Festival Orchestra and Paris Lodron Ensemble in Salzburg.

Tickets:
Free for Pacific and community students with a valid student ID
$5 - seniors (65 and older) and Pacific faculty and staff
$10 - general admission

Tickets available at go.Pacific.edu/MusicTickets or at the door.