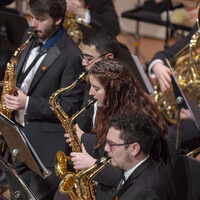 Symphonic Wind Ensemble is comprised of experienced wind, brass and percussion students. Repertoire is drawn from the standards for concert band including Hindemith’s Symphony in Bb and Grainger’s Lincolnshire Posy as well as transcriptions and the great wealth of contemporary music for wind ensemble.The ensemble recorded their second album at the famed Skywalker Ranch Studios in 2013. In March 2019, SWE performed at Stanford and in New York City’s Carnegie Hall.

Tickets are available at the door or in advance at go.Pacific.edu/MusicTickets.

Register
This event content is powered by the Localist Community Event Platform.