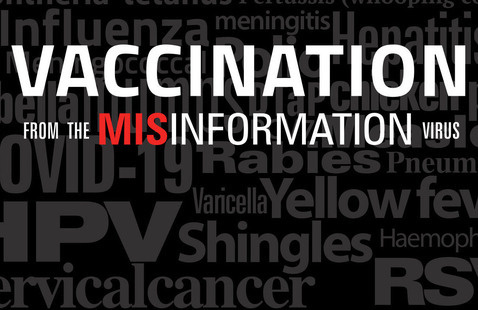 Join us for a screening of Pacific alumnus Chris Schueler's documentary about misinformation around vaccinations. There will be Q&A following the documentary screening with Schueler and Rear Admiral (RADM, ret) Pamela Schweitzer, former Assistant Surgeon General and Chief Pharmacist Officer of the United States Public Health Service (PHS).

In the age of social media, we can all be fooled by misinformation in many ways. “Vaccination from the Misinformation Virus” explains how to overcome our bias to understand why vaccines are safe, crucial to community health and save millions of lives annually. With an overview of how viruses spread, how we contain them and a brief history of the development of vaccines, the program includes information about how vaccines work and their future uses.

FREE AND OPEN TO THE PUBLIC

Pacific alumnus Chris Schueler has created over 100 television programs in the past 25 years that have garnered 26 Rocky Mountain Emmy® Awards and have been broadcast throughout the country and around the world.  Focusing on educational and social issues, Mr. Schueler creates documentaries that are “Television to Touch the Heart.” His documentaries have raised public awareness and also impacted public policy nationally and internationally.  His clients include the United Nations, the National Institute of Mental Health, the PBS network, the CBS Network Foundation as well as networks and governments worldwide.  He has partnered with television stations and universities to teach documentary film production across the U.S. and throughout the world.  Mr. Schueler has led filming crews around the globe including Russia, Asia, Central America, Australia, the Middle East and Africa.

Rear Admiral (RADM) Pamela Schweitzer was the Assistant Surgeon General and Chief Pharmacist Officer of the United States Public Health Service (PHS). As Chief Pharmacist Officer, RADM Schweitzer was responsible for providing leadership and coordination of PHS pharmacy programs and professional affairs for the Office of the Surgeon General and the Department of Health & Human Services.

College of the Pacific Media X