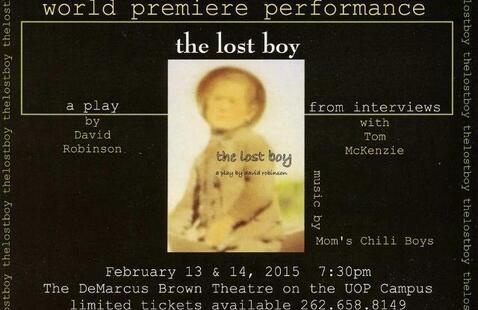 The Lost Boy, a new play written by David Robinson from interviews with Tom McKenzie with original music by Mom’s Chili Boys, premieres at The DeMarcus Brown Theatre at University of the Pacific, February 13 and 14 at 7:30 p.m.

The Lost Boy is based on a true story written from interviews with Tom McKenzie. It is a play about two people, generations apart, reaching across time to keep alive the memory of a boy, loved and lost.

In 1885 a young boy, Johnny Quiggle, died. In secret, his mother, Isabelle, packed a small trunk of his belongings to prove that her son had lived. And then, she plastered the trunk into the wall of the family ranch house. 100 years later, her descendant, Tom McKenzie, discovered the trunk.

The discovery sent Tom on a quest to learn why Isabelle hid the trunk in the walls of the ranch house. What he uncovered was not only a rich family story that reached back generations, but a personal imperative, like Isabelle’s, to keep alive the memory of his kin.

The Lost Boy was originally written as a one-man play intended for Tom (a local theatre artist and educator whose students continue to influence theatre across America) to perform. Music for the piece was compiled and composed by Stockton’s Mom’s Chili Boys. While in workshop for the play, Tom’s health collapsed and the production was shelved. However, the play was never quiet while on the shelf! The Chili Boys continued to compose – the music is now entirely Chili Boy originals - and David Robinson rewrote the play for two actors.

Tom passed away in August of 2014 and with his passing came a renewed interest in the play. Recognizing that Tom’s mentor (and father-in-law) was DeMarcus Brown, the Theatre Department at The University of the Pacific agreed to co-produce The Lost Boy in the DeMarcus Brown Theatre. The play will be performed by Kerri Sherwood (www.kerrisherwood.com), David Robinson (www.davidrobinsoncreative.com), and live music by Mom’s Chili Boys (Jim Marsh, Anthony Kolafa, and Sam Venable- at www.momschiliboys.com).