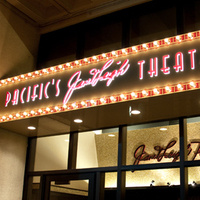 The Janet Leigh Theatre is an on-campus movie theatre featuring weekly films during the school year as well as special talks and screenings. It is named for the late Pacific alumna and award-winning actress Janet Leigh '47, who also bequeated much of her movie memorabilia to the university. Many of these items are on display in the theatre. It is the only movie theater in San Joaquin County that shows independent films. Pacific students receive free admission to films, while faculty, staff and seniors receive a discount. It is located in the McCaffrey Center complex in the central part of campus and is open to the public.

Great movie hope ww can get another family move soon